(China) From Bejing to Ulaanbaatar part 2

New obstacle… Nothing was allowed to be on the roof of the car when the car actually crosses the border and there are still a few mega backpacks on the roof. The Jeep was completely packed with goods that the driver had to import, so he took the back seat out and put our bags there. Only problem now was that there was no more room for us….

Only option was to lay down on the backpacks and Veronika and Michael took the frontseats of the jeep. Of course, this didn’t fit either, so we kept the doors open and half hung out. Very strange but they thought that was good and no problem at all to cross the border like that haha. All’s well that ends well. At the Mongolian border they asked about the famous Dutch football players and then (this happens everywhere, and I’m so into football NOT) we were allowed to enter Mongolia. So happy! Fortunately, we only had to sit for 1 km in this stuffy position before we arrived in Zamin Uud. First paid for the jeep (and yes, he didn’t try to rip us off) Now first find an ATM here because I really don’t have any money left. First checked my phone to see the value of the Mongolian Tugrik. 1000T is € 0.55. I thought if I immediately withdraw 500,000, I would have enough for a while and since you have to pay to get money from an ATM I won’t be throwing money away each time. WHAT?? 5,000 is the limit of the ATM!?! How will I ever get enough money for tickets to Ulaanbaatar? Decided to look for another that wants to give more. Fortunately there were more inside the train station and they had a limit of 350,000. Decided to do that so that I can further explore Mongolia 🙂 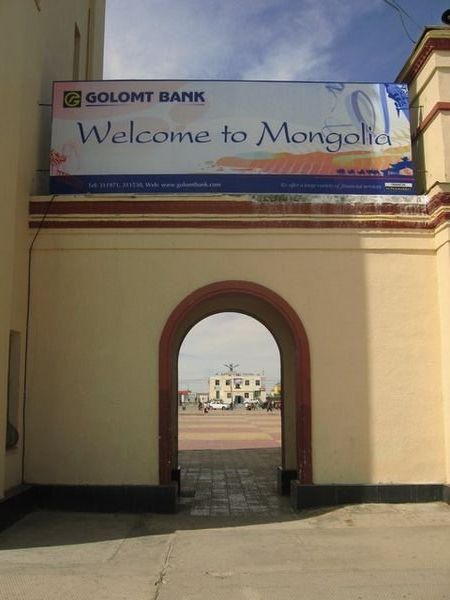 A little later I looked for some info about the train that was supposed to leave at 17:00, but unfortunately it was already full. There were still places available for the 9 p.m. train and we bought them for 32,000 (about 17 euro). A coupe with the others and hard sleepers (Sort of a wooden board that functions like a bed) Just perfect, except that we had to wait another 10 hours for it to leave. Got really hungry meanwhile so decided to go and explore Zamin Uud with a full pack. After a 15-minute walk we already discovered that we had seen just about everything and that we were therefore unable to find a place to eat other than the one at the station. We finally found a kind of small eating place at the station where we pointed to someone’s plate to make clear what we wanted to eat. Received some kind of dumplings from the frying pan that were really delicious. Everyone was so hungry that we burned our lips and mouth. The only thing I really need now is Wifi to let Golden Gobi (the Guesthouse in Ulaanbaatar) know what time I will arrive.

My search for WiFi started and eventually found it somewhere in a creepy box in the basement of the train station. Unfortunately it was’nt working at that time, but could come back after lunch time and the guy I was talking to said he would probably have it up and running by then. I really got a mega (sort of after dinner) dip and didn’t know how to sit and how to get through the upcoming hours. Somehow I fell asleep on iron chairs and woke up after a few hours. Unfortunately still no wifi, so decided to try passwords from other wifi providers. Actually succeeded with 123456789. All telephones and laptops appeared and we were back on Facebook after 8 days. At such a moment it is really nice to have contact with friends and family again. Meanwhile, 3 Belgians from the French-speaking area had come to join us and 2 Australians too. We’ve already met them at the border, but at that time it was everyone for themselves. Sitting around and talking to their horror story from the border crossing and it was way worse then ours. I didn’t have much contact with the Australian people, they were more yoto themselves. So in the meantime we became a nice group of backpackers from different parts of the world. Time went pretty fast by then and we quickly did the last bit of shopping (for the the trainride) and got on the train.

The entire train was really stuffed with goods that came with the jeeps in the morning at the border. Fortunately we had our own coupe so no problems for us. Once we were on the train, a woman on the train brought tea and sheets. Because we brought our own things, we didn’t think it was necessary to buy that. The woman disagreed and started to beat her money furiously. We were angry with her too, but we had laugh about it! But she clearly didn’t like it that we didn’t want to buy her stuff. She got so mad that I was not allowed to go to the bathroom(she locked it), which is going to be quite difficult if you have to go on a train for 14 hours but didn’t have to go yet so no problem haha. Finally locked the door of our coupe and went to sleep.
At 5 o’clock at night the woman knocked loudly on our door, so we thought there was a lot going on, but no. She was going to remove our warm blankets (which were our own blankets) while it was freezing in our compartment. A lot of snow had already fallen. Everyone woke up immediately and Veronika started to pull hard to get the blankets back and then gave that woman a push and quickly closed and locked the door, so that we could sleep nice and warm again. So we clearly didn’t make our first Mongolian friend! Half an hour before we arrived at UB I had to pee very badly, but all the toilets were closed. I was about to piss through the window when I heard that we we’re about to arrive in Ulaanbaatar.. 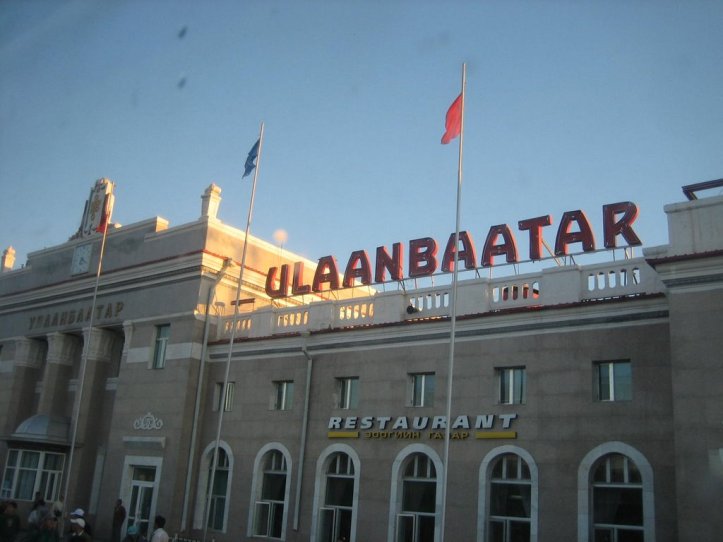 Arrived in UB. Searched for a toilet for about 15 minutes but finally found one haha.  Then I decided to go into chaos and look for Golden Gobi. After about 30 minutes walking in all directions with my heavy bag, nothing, asked around for a bit aswell but couldn’t find anybody that understood what I was trying to say. (someone from Golden Gobi was suppose to pick me up) What a shitshow. Fortunately I came across the Belgians again who were a little lost. They had to wait another 2 hours for their bikes that were still on the train. They actually had a lonely planet book for Mongolia and the phone number of Golden Gobi was actually in t that book:-). So I finally found a local that was willing to call Golden Gobi for me. I think I’ve thanked him 20 times! Golden Gobi immediately came to pick me up and I was finally on my way to a shower 😛

When I entered Golden Gobi guesthouse, the Australians with whom I have been on the train were also there. I had no clue they were going to Golden Gobi aswell… They took a taxi from the trainstation and payed so much money for it. (So I was glad I had a bit more patience and got a free pick up) So nice to arrive somewhere after 52 hours of traveling.
Golden Gobi Guesthouse has a homely feeling, which is very nice. There was a nice little living area where you can all sit comfortably and use your laptop and chat with the other backpackers or the family members of the guesthouse. After a while I took a shower and put my stuff away. Afterwards talked to one of the family members to plan a trip for the coming days to travel through Mongolia. Meanwhile got to know the Australian couple and decided to go on a trip with them since we basicly wanted he same thing. Finally ended up with a pretty long trip through Central Mongolia.
Decided to do a nice homely dinner tonight and went to bed pretty early…