(China) From Bejing to Ulaanbaatar part 1

Woke up at 5 o’clock in the morning to take the train to Erlian today. I am ready for a new adventure. Beijing has been nice when I look back on it, but for now I’m done with the Chinese.

I decided to take the metro to the trainstation, so I no longer had to deal with those annoying taxi drivers. But how do I stuff myself into that overcrowded subway with a huge backpack on my back? Guess I can handle those little Chinese people (even for me their small haha)
Was a bit scared this morning that I was going to miss the train but luckily it went reasonably well until I had to choose in which coupe I had to go into. All the signs were in Chinese so really had no clue… Two of the little coupe’s weren’t completely full, so just had to choose one.
Sat with 2 nice Mongolian people in the coupe. A mother with her son and they even spoke a little bit of English. Everything went really well this morning after all the Chinese people who couldn’t speak a single word of English. They offered me traditional Mongolian food, so I was completely happy! It didn’t really last long though…
Apparently I was in the wrong coupe. Unfortunately I had to move to a few Chinese people. They made food pretty much the entire trip and it smelled so bad… 😦 From their way of doing things you could notice that they were very nice people, but communicating is just very difficult and they have such other habits. But ah well .. I was allowed to use the upper bed and made my own little bedroom. The beds were very nice which was a big plus since the total trip to the border was aboutg 13 hours and slept almost half of that 🙂 The view from the train was beautiful after leaving the city. The train ran through the mountains, which gives a very cool image. Listen to music on my old crappy mp3 player that was stuffed with relaxing ‘travel songs’ and enjoyed the view for a couple of hours.
I thought I would arrive in Erlian at 00.25 at night, but the train arrived around 21:00 already! At a super pace gathered all my stuff I took out of my backpack to get out of the train and hopefully wouldn’t leave anything behind…. 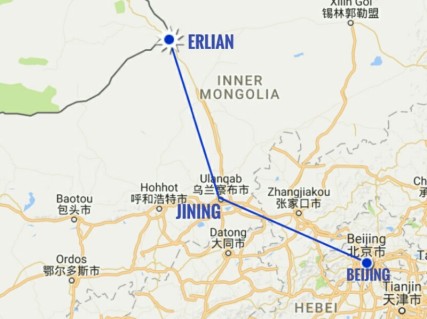 Suddenly found myself in this dark border town of China and Mongolia to hopefully cross the border tomorrow and didn’t really have a plan from here. Usually everything works out the moment you get somewhere but no clue where I had to go to get myself a little room for tonight.
Fortunately I saw two other lost backpackers and asked them if they had any plans or hotelbooking. It was not very difficult to spot them because we were the only ones who looked a bit lost. We decided to continue together and discovered that they already had a lot of experience travelling which is very positive for me:-).
Right at the edge of the station there were a few hostels, restaurants and supermarkets. Most of it was closed already so that didn’t really help but Veronika (1 of the other backpackers) did find a little hostel that still had 1 room available (problem was that we actually needed 2). We inspected the rooms and tried to bargain a little bit to get something of the price but that didn’t really work but the good thing was there was enough space for all of us. In the beginning it was still difficult to trust them (everything I owned was in my backpack so that was a bit scary at first but kept my passport and creditcard with me at all times) but soon found out that they were good people. After throwing our backpacks in the room we had some super delicious dumplings! After dinner we all went to bed. The beds were more like wooden planks with a sheet. Ah well it almost didn’t cost any money to stay there for the night and we had to get up at 6am again anyway…..

After breakfast I had to try to get some cash to crosss the border to Mongolia. After having tried 4 different ATMs I had given up hope. Fortunately, the other backpackers offered to give me some money if necessary to cross the border and pay them back in Mongolia. What a relief!! We could finally walk towards the border. Meanwhile walked all morning with full packs (getting nice blue/purple/yellow shoulders). After a few km we arrived at a bus station where we could take a bus to Zamin Uud. To bad there were no busses at the station at all but there was a jeep so the owner of it said we could go with him for 150 yuan. We thought that was a bit too much so went to check the price of the bus tickets. These were 60 yuan p.p. which means it was more expensive to take the bus to the border. Unfortunately the jeep was already gone so we decided to walk to the border.
Unfortunately you can’t cross the border by foot (no idea why) so we really had to find someone who wants to take us across the border. But we didn’t see anybody the last few km. We started to think we were heading into the wrong direction or that the border was closed on sundays since it was just way to quiet. Only thing we could do now was just keep walking and hope for the best that we will see someone with a vehicle that has to cross the border where we can hop on.
Just before we were there, we found a jeep that wanted to ‘help’ us. It did not cost us anything, he said, even though we knew better. We probably asked 5 times that he didn’t want anything in return. Ah well let’s just give it a go…. as long as he brings us across the border its fine. Huh? That’s strange, he turned the car around and drove the other way. We will see where we’ll end up since we couldn’t just jump out of his jeep. We were actually okay with it since we’ve been walking for about 7 of 8km in the burning sun with our full backpackes.
Suddenly we turned on a different ‘road’ and saw lots of cars and a gas station we had heard about that was really close the border. Jeeeej we’re going in the right direction! But suddenly he stopped and we had to leave his car. Really a few meters before the border. Fortunately, the other man with the jeep we had spoken to earlier at the bus station was here and he was still interested to take us for across the border for 150 yuan. So we went from one jeep to another and now we could really go! Until the other driver complained that he wanted money for a ride of a few meters what we agreed on that wasn’t going to cost a thing! It became quite a hassle until the other guy I was with gave him a push and quickly closed his door and the jeep drove away and gave up to get some money from us.
The man with who we crossed the border was happy and very nice and wanted to earn a little extra money (he had to cross the border anyway and now made 150 Yuan with it), which both worked out well for us. First leave China and then entered Mongolia. 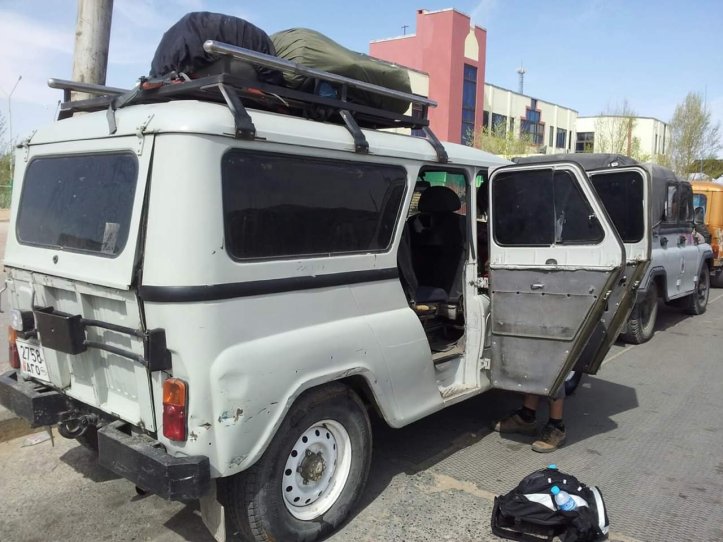